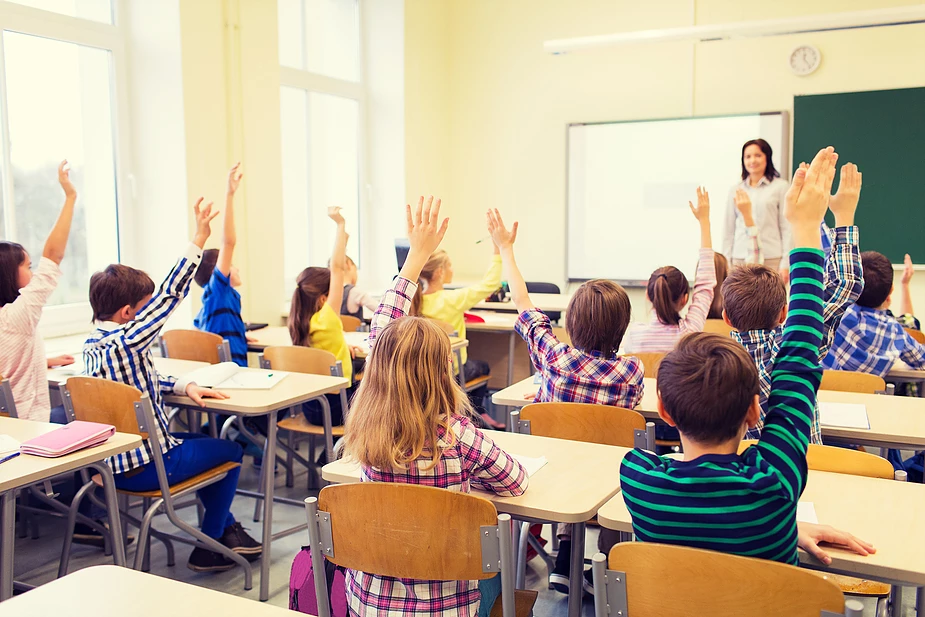 How do Swiss state schools differ from schools in other countries?

The Swiss educational philosophy emphasises subject knowledge, self-reliance and, like the US, a broad-based education. Foreign languages carry the same weight as maths or sciences (if not more). Also, students in Swiss state schools are not able to drop subjects in higher secondary. By contrast, the UK curriculum is geared towards the achievement of national standards and a high level of specialisation.

In US schools, sports and and creative subjects feature prominently in the curriculum. In Switzerland these activities tend to be organized by private clubs outside school.

In Switzerland, many children do not enter the childcare system before starting Kindergarten at the age of 4 or even 5. Kindergarten has a play-based approach that does not focus on preparing children for school academically.

Many parents coming from a different system are shocked to learn that children do not learn reading and writing in Swiss state schools until the first grade. In countries like the UK and France, children usually join nursery at the age of 2 or 3 and start their academic learning in pre-school.

In the majority of countries, all students attend one comprehensive secondary school and might only be streamed into ability groups in single subjects. Most Swiss regions, by contrast, channel children into different performance streams and schools after primary school, from academic to more vocational streams.

Competition, school ranking and league tables are widely unknown in the Swiss education sector. The choice of the ‚right‘ neighbourhood is a deciding factor for many parents looking for good schools in the US or UK. Swiss parents will generally choose accommodation based on convenience or other criteria and assume that the neighbourhood school will be of good quality.

Also, while schools in Switzerland do undergo cantonal achievement tests, schools usually do not publish the test scores.

Swiss state schools are generally well-resourced and staffed. You will not come across significant quality differences across neighbourhoods, as is often the case in other countries. This might explain why 95% of Swiss children attend state schools.
Still, there are significant differences between locations, so be sure to do your research or engage the services of a local school consultant.

Switzerland places less emphasis on ‘big’ examinations than the UK and many Asian countries. Students in Swiss schools undergo continuous assessment with many tests throughout the year. Key stage achievement exams are not common in Swiss state schools and only students completing senior academic high school will sit a final exam. While Switzerland is gradually introducing national education standards, it does not assess student’s achievement of quantifiable national standards like the UK does.

Interestingly, Swiss universities do not have entrance exams for most university programmes. Medicine is one of the few programmes with an entrance exam. In some regions, however, students need to pass a demanding entrance exam for access to the academic stream in secondary state school.

Classroom instruction in Switzerland tends to be more teacher-centric compared to other educational systems. Swiss schools emphasise more ‚traditional’ values, such as politeness, neatness and responsibility and the teacher has far more autonomy in the classroom than her counterparts in the UK or US.

Whereas in South Korea or France over 70% of students enter university directly after high school, in Switzerland it is around 20%. Part of the reason is that Switzerland offers many professional pathways that do not require university studies. University in Switzerland is still regarded as pathway for mostly academic professions. The majority of high-school leavers will learn a profession and might chose to gain more qualifications or a university degree after completing professional training or even several years of employment.

Do you want to know more about the Swiss school system?
Book your online appointment with a local school expert!
Find out more: