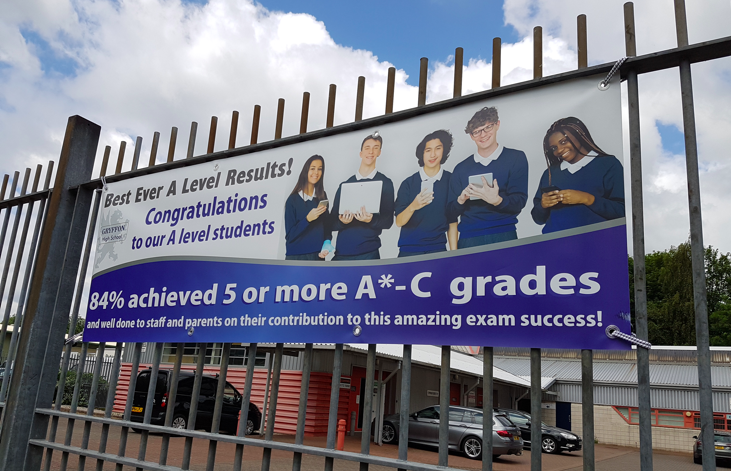 Expat parents looking for school rankings and league tables in Switzerland struggle to find any meaningful information. School performance across schools in Switzerland often remains a mystery. Is this about to change?

Last month, the Swiss education authorities published the results of the first-ever nationwide comparative assessment in mathematics, the national language and the first foreign language. The tests were intended to show student achievement based on national educational goals. In 2016 and 2017 across the whole of Switzerland, 23,000 pupils in grade 11 of secondary (maths assessment) and grades 5 and 6 of primary school (language assessment) sat tests.

The results for some Cantons were sobering. 6 out of 10 Swiss students fail to achieve the learning outcomes for maths at the end of compulsory schooling. This might explain why the education authority published the test results with nearly a one year delay.

In various Cantons, students failed to achieve the required learning outcomes in mathematics, the first language as well as their first foreign language. What is particularly striking is the difference in performance between regions (see chart below). What is probably even more surprising is that these results are in stark contrast to those of the latest rounds of the OECD international school ranking (PISA) studies. The 2015 PISA study actually found Swiss students to be the best in maths in Europe. Arguably PISA is an international and the Cantonal attainment test a national assessment. Still, the difference in results raises some questions.

Chart 1: Mathematics performance among students in grade 11 HarmoS (3rd grade of secondary). The below chart shows the percentage of students who meet the so-called ‘basic competencies’. (Source: EDK) 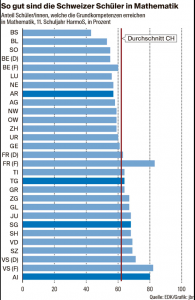 At the top are the Cantons of Friborg, Valais and Appenzell Innerrhoden, where students demonstrated an above-average score in both mathematics and both their first and second languages. At the other end of the spectrum are the Cantons of Basel-Stadt, Baselland and Solothurn. The attainment gap in Basel-Stadt is particularly pronounced: Less than half of the students managed to attain a passing score (43.5 per cent) in mathematics and scored even worse on the language skills tests than their peers in almost all other cantons.

The results of the Zurich students are close to the Swiss average in both mathematics and languages. The same can be said for nine other cantons, including Aargau, Appenzell Ausserrhoden, St. Gallen, Thurgau, Graubünden, Uri, Obwalden, Nidwalden, Neuchâtel and Geneva.

The EDK (Swiss Conference of Cantonal Ministers of Education) and the cantonal education departments were suitably dismayed by the massive Cantonal differences. For far too long, Swiss politicians have been comfortable assuming that Switzerland has one of the best education systems in the world. Do the latest test scores mean that reality is finally catching up with Swiss fantasies? The reaction is that with below-average results in some Cantons, educational departments in the affected Cantons are desperately trying to make sense of the data.

Is the urban-rural divide to blame?
But why do the two urban cantons Zürich and Geneva show average attainment?

Is the attainment gap related to the tracking in the Swiss school system or the low high school entrance rate?
Maybe, but how come that Basel Stadt has almost double the Gymnasium entrance rate compared to Appenzell, one of the top performers!

Are socioeconomic factors the real culprit?
Some say that Basel Stadt has received a high number of immigrants in the last few years. But so did Zürich!

What else could have caused these stark differences in performance?
With so many questions to answer, the educational authorities certainly have their job cut out for them!

Switzerland has only recently started to develop national educational standards. This might seem surprising to parents coming from countries with a long history of school ranking and national attainment charts. Compared to most other countries, Switzerland is years behind when it comes to national school standards. This can partly be explained with the Cantonal autonomy, which is fiercely defended by the Cantons. The first ever attempt to harmonise important learning objectives and outcomes at primary and secondary school levels, the “HarmoS” agreement only came into effect in 2009 and some Cantons are only just implementing the agreement now in 2019 (only those that signed the agreement!).

School Rankings in Switzerland-is it coming?

Following the assessment debacle in several Cantons, some ministers have stressed the need to further develop national assessment standards and standards-based tests for students in primary and secondary school. So, expect to see more comparative assessments in the future.
But it is hard to imagine the Cantonal education departments going down the American way where schools are penalised for poor performance. Neither is Switzerland going to publicise school-level test scores any time soon.  In this sense, do not start to watch out for big banners at the school gates proudly stating exam results akin to those in the UK or US!

Considering the ranking obsession in some countries, this might actually not be a bad thing! 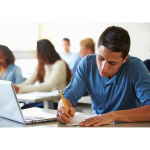